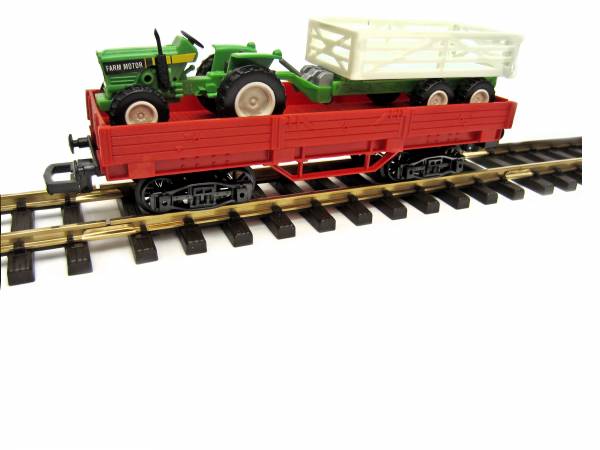 - The tractor belongs to the cows but not. It is a new commodity of NewRay origin, which is unpacked for processing.
Please do not compare these trailers from Zenner with the original trailers of Dickie and NewRay since Zenner trailers are compatible with LGB and those of Dickie and NewRay do not. These changes are complex.
Couplers with compatibility to LGB

- The manufacturer is NewRay (The trailer is identical with Dickie but not with Dickie with the Cargo Set.The couplings are converted by ZENNER and then adapted to the automatic couplings of type LGB (similar to Piko, Aristocraft, Bachmann and others) ), Without losing the ability to function automatically with the locomotives and wagons of NewRay, Dickie or NewBright.For most couplings, which are not identical, the automatic function is often not available.Coupling only via manual control Often not at all, since they have different horns.

Where the buffer of the LGB car is, some LGB trailers can give me this NewRay car problems because the hook of the cattle car is sitting in the middle and can bump into the buffer. If you hang the trailers, as usual with LGB, in the order clutch with hook against clutch without hook, there is no problems with the middle buffer, even if one the trailer makes mixes. However, when the LGB car is rotated and the hook of the LGB collides with the hook of NewRay and the buffer, the buffer can prevent hooking. Then the NewRay hook has to be pushed by hand only laterally and then under the buffer. Each hook is machined to avoid sideways movement.

If this is laterally displaced, which is often the case, it slides under the buffer. Then there are no problems. On the other side of the cattle truck without hooks the LGB clutch with hooks works excellently. In LGB, there have been several versions of buffers with various dimensions over the years:

A) old large medium buffers in locomotives, today rare. There are the biggest problems.

B) Narrow rounded central buffers. Since the coupling in case hooks against hooks often only by hand. If the distance between the LGB buffer and the bracket is too small, the NewRay hook has to be grinded (0.8mm)

C) Wagons and locomotives where the buffers are slightly higher. There are no problems

D) two side buffers (e.g., Diesellok V200, Elektrolok E10 or DR passenger cars and DR luggage.) There are no problems.

D) US locomotives and wagons do not have a buffer, so there are no problems.

- for indoor and outdoor use.

The carriage can be mounted on all the rails of the track G, e.g. LGB, Piko, Bachmann, Aristocraft, NewRay, New Bright and others. On Märklin lane 1 it works only if the diameter of the wheels is reduced. Märklin clutch is available from Zenner for the conversion. But this is very complex.

- For each NewRay car with modified couplings, 7 faces shall be machined. It is then checked for the Zenner test track and the running characteristics and couplings checked for automatic function with LGB and identical couplings (Bachmann, Aristocraft, Piko, etc.) as well as the combination with couplings from NewRay, Dickie and Echo Toys. Therefore the locomotives and trailers upgraded by Zenner can not be compared with offers from Dickie and others.
- Possible quality deficiencies are eliminated. This makes our trailers more high-quality, although they can not be compared with the quality of LGB. For this, they spare the money bag and make it easier to get into the garden world.