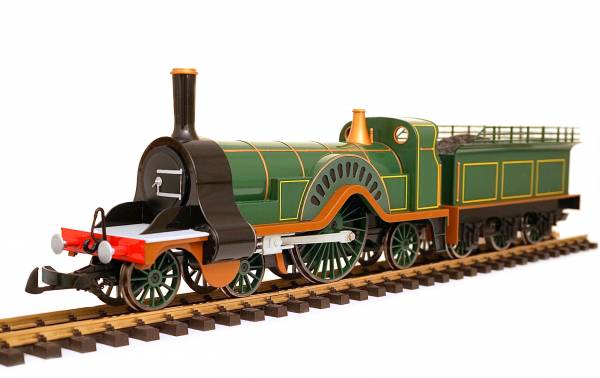 This steam locomotive of the Great Northern Railway company was built between 1870 and 1895. Today there are still some examples of this unique and beautiful locomotive.

There are two variants as a kit to complement and beautify the Bachmann locomotive, since the locomotive with the face from the series Thomas and Ffriends is not everyone's taste.

A) The parts of the mounting kit are not painted. They must also be deburred. But you save money. This version is offered here

B) as a) but all parts are deburred and varnished. All you have to do is stick them on. This version is also available in our shops.

Please note: the smoke chamber door has changed somewhat with us in the past. The pictures on the left show the new version offered here. The photos to the right show the old variant in beautiful nature. The carton is slightly damaged by the transport

- for indoor and outdoor use
- Rail track G with 45 mm track spacing.
- Change of direction on the transformer
- Digital decoder can be retrofitted to DCC standard and sound module
- Instead of LGB couplings also the von Bachmann gauge G possible
- Packaging on one side slightly damaged.
The locomotive receives the current via the metal wheel sets. Input 0-20 volts. Piko controllers for example are suitable. No. 350006, which can be connected to water-proof Piko transformers with protection class IP 67 and with the power of 32 VA or 100 VA.

Option. Upgrade kit for WLAN control with Smartphone on request